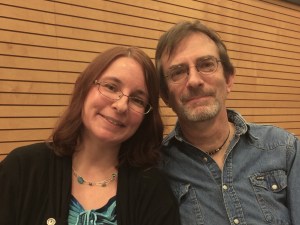 Most writers work alone, spending months inside their own heads while writing their novels. Collaboration is a skill–and an opportunity–not all of us have, and when looked at from the outside appears just a little mysterious. This month partners Marsheila (Marcy) Rockwell and Jeffrey J. Mariotte agreed to share a little about writing their latest collaboration, 7 SYKOS, a SF/H/thriller that has been described as The Walking Dead meets The Andromeda Strain. Marsheila (Marcy) Rockwell and Jeffrey J. Mariotte have written more than 60 novels between them, some of the most recent of which are The Shard Axe series and a trilogy based on Neil Gaiman’s Lady Justice comic books written by Marcy, and Empty Rooms and Season of the Wolf by Jeff. They’ve also written dozens of short stories, separately and together. Their collaborations include the novel 7 SYKOS and short works “A Soul in the Hand,” “John Barleycorn Must Die,” “V-Wars: The Real HousewiVes of Scottsdale,” and “The Lottons Show.” You can learn more about Marcy and Jeff, and find news about upcoming projects, both collaborative and solo, at www.marsheilarockwell.com and www.jeffmariotte.com.

Q: Where did the idea for 7 SYKOS come from?

Marcy: I don’t even remember anymore. We’re both fascinated by psychopaths and how they become what they are, so we knew we wanted to explore that in a book. The rest just sort of happened.

Jeff: The initial impulse for 7 SYKOS came from a book I was reading about the unique brain structure common to many psychopaths. It struck me that there might be a situation in which only psychopaths would be able to survive and thrive. I was driving, I remember, and as the story was playing out in my head, I called Marcy and said, “Hey, how about this…”

Marcy: Well, there you go. Sometimes his memory is better than mine. 😉

Q: What was your favorite part of writing the book? Do you have a favorite (non-spoilery) scene?

Marcy: The back-and-forth with Jeff, playing the what-if? game, and bouncing ideas off each other. That’s something you don’t get writing alone, and it made the process more fun. As for a favorite scene – that’s hard; there are so many I like for different reasons. I guess the scene in the pool house, because it was cathartic.

Jeff: I think my favorite part was doing the research. Learning more about psychopathic brains, and traveling around the Valley of the Sun with Marcy to find appropriate locations, was all fun and fascinating. Taking her to the huge Bass Pro Shop in Mesa and watching her reaction was great, too.

Q: Marcy, what made you want to start writing with Jeff? How is writing with him the same or different from the other collaborations you’ve done?

Marcy: I was actually quite flattered when he asked me if I wanted to collaborate on something. Jeff has so much more experience in this industry than I do – when we first started working together, I think I’d only written three novels to his 50+. And, of course, I liked his writing and thought it would be a good fit with mine, so I jumped at the chance to work with him. It’s been a really rewarding experience so far.

As for how it’s the same or different from other collaborations I’ve done, that’s easy – I’ve never really successfully collaborated on prose with anyone else, so the fact that it works and works so well with Jeff makes it a very different experience from any I’ve had before. Part of it, for me, has to do with trust – my writing comes from a deep (usually pretty dark) place, and I have to really trust someone to be able to share the process with them. Luckily, with Jeff, I do.

Q: Jeff, what made you want to start writing with Marcy? How is writing with her the same or different from the other collaborations you’ve done?

Jeff: Since first reading Marcy’s work, I’ve had great respect for her talent. We have a lot in common, creatively and in other ways, but different life experiences, so we each bring something to the table that the other can’t, and we’re enough alike that it meshes very well. By the time we finish a project, I often can’t remember which of us wrote what, which means we’re able to smooth everything into one consistent voice. Every collaboration is different, but with Marcy, it’s a true partnership, and the work we do together ends up being the most creatively satisfying collaborative work I’ve ever done.

Q: What are the hallmarks of a Mariotte/Rockwell story?

Marcy: Well, the hallmark of a Rockwell story is that it’s dark and twisty and usually features a strong female protagonist. I bring those things to my collaborations with Jeff and he brings some light back into it. And some magic and romance, too. Plus I make him write the fight scenes, because I hate those.

Jeff: What she said. 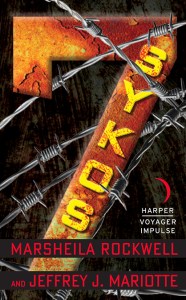 Q: Which do you prefer, collaborating or writing solo?

Marcy: It depends. I like the creativity that flows when Jeff and I work together. He’s better at plotting than I am, so that part of it is not such a struggle when I write with him. But I also have projects that I’ve been working on for a long time where it would be hard to give up full control and share.

Jeff: They’re two completely different animals. Sometimes I’m asked if I prefer writing prose fiction or comics, and the answers the same. There’s very little real comparison, because it’s not like two different shades of red, for instance, it’s like a shade of red and a lead guitar riff. Each has its unique pleasures and unique struggles, and I love doing both, but ranking them is impossible.

Marcy: It’s hard to pick just one; we’ve written several short stories that I’m really proud of. But probably my favorite would have to be 7 SYKOS. I think we created some interesting characters and have a fresh take on some old ideas and I’m looking forward to seeing how it’s received. As for solo work, I’m really fond of my Eberron stories and would love to be able to go back and play in that sandbox someday.

Jeff: 7 SYKOS is my favorite collaborative work, but the short story “The Lottons Show” runs a close second. My favorite solo work to date is the dark thriller EMPTY ROOMS. I’ve just been rereading a novel that comes out later this year, DEADLANDS: THUNDER MOON RISING, and it’s holding up well, too.

Q: Anything else you want to add?

Marcy: Just that folks should follow us at our websites and on FB/Twitter to keep up with current and future projects. Thanks for having us!