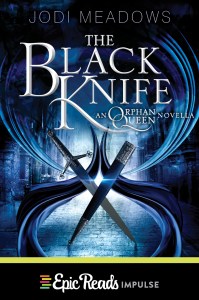 Skyvale is on the verge of becoming a battleground. Told from the perspective of Tobiah, the crown prince with a dangerous secret, and set two years before the heart-racing action of The Orphan Queen, this 100-page digital novella brings to life one of Jodi Meadows’s most beloved characters.

Tobiah Pierce has been beaten and broken and has lost two people he cares about. His worst enemy knows his deepest secret. What he thought he knew about his family has fallen apart. And his parents push harder than ever for him to court Lady Meredith. But with the imminent threat of firefly, the newest and deadliest version of a magical drug, Tobiah doesn’t have time to sort through his problems. If he doesn’t act immediately, firefly will suffocate the city and everyone in it.