The House of Binding Thorns (A Dominion of the Fallen Novel) by Aliette De Bodard (Ace, April 2017) 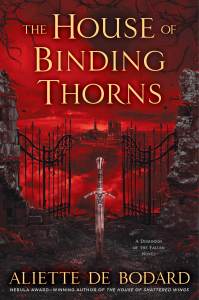 As the city rebuilds from the onslaught of sorcery that nearly destroyed it, the great Houses of Paris, ruled by Fallen angels, still contest one another for control over the capital. House Silverspires was once the most powerful, but just as it sought to rise again, an ancient evil brought it low. Phillippe, an immortal who escaped the carnage, has a singular goal—to resurrect someone he lost. But the cost of such magic might be more than he can bear.In House Hawthorn, Madeleine the alchemist has had her addiction to angel essence savagely broken. Struggling to live on, she is forced on a perilous diplomatic mission to the underwater dragon kingdom—and finds herself in the midst of intrigues that have already caused one previous emissary to mysteriously disappear….   As the Houses seek a peace more devastating than war, those caught between new fears and old hatreds must find strength—or fall prey to a magic that seeks to bind all to its will. 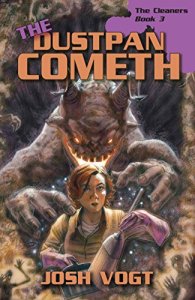 In the aftermath of an emotion-manipulating virus that nearly wiped out the Cleaners, Dani has immersed herself in company work and training. After all, who has time for self-reflection when there are monsters to be mopped up? However, during one shift, she finds herself face-to-face with Sydney, the entropy wielding Scum able to turn anything to dust with a touch. He’s come to remind her of the deal she made so he’d spare a child’s life, and he’s not leaving until she upholds her side of the bargain—by going on a date with him. Ben, on the other hand, is dodging trouble of his own. Desperate to restore his powers, he’s submitted increasingly absurd ideas for doing so in the Employee Suggestion box, though he expects them to just be laughed off. When a concept gets unexpectedly approved for a trial run, it makes him a target for his coworkers, who are all-too-eager to put his theory to the test. Pity that it’s designed to leave him as miserable and paranoid as possible. Even as the two wage their private wars, strange forms of Corruption strike in the heart of Denver, transforming swaths of parks and neighborhoods into lifeless deserts and turning everything and everyone caught in the phenomena to sand. Scrambling to contain the situation, the Cleaners quickly target Sydney as the likeliest source of the disaster. While the entropy mage denies any involvement, his reputation is hardly spotless, and plenty of Cleaners are prepared to put him down at all costs. But after encountering another potential culprit, Dani finds herself inexplicably defending her would-be beau. As her own loyalties are called into question, she must still prepare to face her greatest challenge ever: Wearing a dress in public.