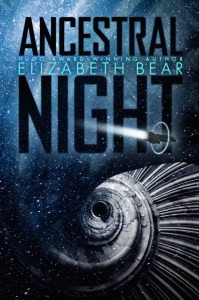 A space salvager and her partner make the discovery of a lifetime that just might change the universe in this wild, big-ideas space opera from multi award-winning author Elizabeth Bear.

Halmey Dz and her partner Connla Kurucz are salvage operators, living just on the inside of the law…usually. Theirs is the perilous and marginal existence—with barely enough chance of striking it fantastically big—just once—to keep them coming back for more. They pilot their tiny ship into the scars left by unsuccessful White Transitions, searching for the relics of lost human and alien vessels. But when they make a shocking discovery about an alien species that has been long thought dead, it may be the thing that could tip the perilous peace mankind has found into full-out war. 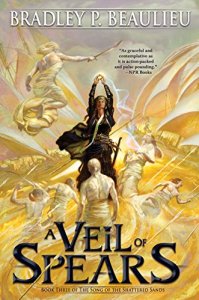 Since the Night of Endless Swords, a bloody battle the Kings of Sharakhai narrowly won, the kings have been hounding the rebels known as the Moonless Host. Many have been forced to flee the city, including Çeda, who discovers that the King of Sloth is raising his army to challenge the other kings’ rule.When Çeda finds the remaining members of the Moonless Host, now known as the thirteenth tribe, she sees a tenuous existence. Çeda hatches a plan to return to Sharakhai and free the asirim, the kings’ powerful, immortal slaves. The kings, however, have sent their greatest tactician, the King of Swords, to bring Çeda to justice for her crimes.

But the once-unified front of the kings is crumbling. The surviving kings vie quietly against one another, maneuvering for control over Sharakhai. Çeda hopes to use that to her advantage, but whom to trust? Any of them might betray her. As Çeda works to lift the shackles from the asirim and save the thirteenth tribe, the kings of Sharakhai, the scheming queen of Qaimir, the ruthless blood mage, Hamzakiir, and King of Swords all prepare for a grand clash that may decide the fate of all. 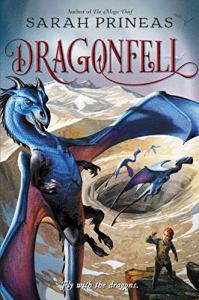 Rafi Bywater is unlike anyone else. The people in his village don’t trust him because he spends too much time in an abandoned dragon lair. When a stranger, Mister Flitch, accuses Rafi of being “dragon-touched,” Rafi sets off to discover the truth about dragons—and about himself.

On his journey, Rafi befriends a brilliant scientist, Maud, who has secrets of her own. Together they search for dragons while escaping from a dangerous dragon hunter, engaging in a steam-engine car chase, and figuring out what Mister Flitch really wants with Rafi. And, oh yes, they do find the dragons.

Sarah Prineas delivers a sweeping adventure filled with glorious dragons of all kinds!