World building is hugely important in any fiction genre. Effective world building enables us to create a setting, in which the reader can relate to the characters not only visually, but also in terms of their own sensory experience. A realistic world is essential for a believable story, and it can make all the difference in engaging the reader. Thus, I tend to think of world building tends as the essential first step when starting out a new book.

Authors of science fiction and fantasy face an additional challenge: we are creating a new world from scratch, building off concepts and settings other people are not familiar with. Of course, this is also additional fun. We have all the power in this brand new world, and we get to set all the rules.

So, why do we need rules anyway?

Any world we know contains boundaries, where some things are common while others are truly impossible. The same goes for any created world too. Rules and boundaries are essential to gain the readers’ trust, and think of your world as a realistic one. Watching the characters constrained by these rules makes them much easier to relate to. Without rules, the reader would not be able to develop any expectations following the events in the book. This creates an ungrounded feeling that ultimately prevents the reader from getting emotionally and intellectually invested.

As a fantasy author, I spend a lot of time building my worlds, and I have developed a process that helps me along. It can be tedious at times, but most of the time, it is so much fun.

When I approach the task of building a world, I follow several essential steps. As soon as the idea of a novel is in my head – definitely before I start working on the bulk of the text — I think through the following list of action items, in this order:

Some of these details can be left for later, but this major decision about the scale of the world has to come right at the start. In my case, I follow this decision by sketching a very crude map, and as I work through my story I continue to populate it with places, names, and key elements of the landscape. I am not an artist, so these initial sketches always look horrible, but they do help.

In everyday life, we use a lot of geographical references in our speech, without even noticing them. “Up north”, “back east”, “over in Cleveland”, “back in Russia”, “in Challimar deserts” – these are very telling details about the world and the characters that people tend to drop into their conversations, and if I have a map with geographical names in front of me when I write, it allows me to populate my characters speech with these references from early on. It really helps to make the world more authentic.

Going deeper into this, I usually also think through the languages people speak. In a multicultural world it is often helpful for everyone to speak some sort of a common language, but it is also fun to give language flavors to different groups of people — e.g., an accent, or differences in pronunciation. These are great details that can add authenticity to the story – but they should be used very lightly. If not, they can easily overwhelm the readers.

I find it useful to utilize known concepts and elements. For example, a lot of my worlds have Middle Eastern elements, because these fascinate me and I really enjoy writing about them. I also freely draw from my Russian background. Using some obvious elements from known cultures often helps to ground the reader, by drawing on the details they already know. Too much unfamiliar can be off-putting and detract from the story. But it is, of course, very cool if you can come up with something truly original!

Only after this initial work do I feel ready to work on the bulk of the main text. But my world building does not end until the book is complete. As I write, I continue to interrogate each setting and each scene for additional details that can help further define the world.

And here is the hardest part. Having gone through all this work of creating a brand new, incredibly cool world I know everything about, the temptation is to tell the readers as much as I know, as soon as possible. How much should I put on the page? How much do I leave unsaid?

In deciding these things, it helps me to remember that any story is first and foremost about characters. In thinking of how much detail to put into the book, I get into my character’s head and try to see the world through their eyes. Even if the world they live in is new and cool to me, it is usually very familiar to them, and the details they would notice first are not necessarily the ones that would stick out to someone seeing this world for the first time. It becomes lots of fun to identify these details, and showing them actually does volumes to highlighting the background that is not explicitly shown at all.

I took the liberty of including the opening paragraphs of my new novel SHADOWBLADE, which can show examples of some of my world building:

Gassan heard the shouting from all the way down the narrow stone passageway leading to the entrance of the serai. A woman, her voice raising to a near-scream and eventually dissolving into sobs. He broke into a run, noting in passing the slanted crescent of the waning moon peeking in through the narrow window overhead. Not the average hour to expect visitors in the Daljeer command center, disguised as a scholarly hall.

The door at the end of the curving passage stood ajar. Gusts of cool night air washed through the entrance hallway, filling it with the scents of desert rosemary and creosote. As Gassan skidded around the last bend, he caught a view of the moonlit path outside, winding to the city down below. Dark shapes loomed along it, outlined against the white sand. Boulders? Odd. Just yesterday, when he arrived here from the empire’s capital for the celebration of the Sun Festival, the path had been clear. He peered closer, a chill creeping down his spine as the objects began to take shape. 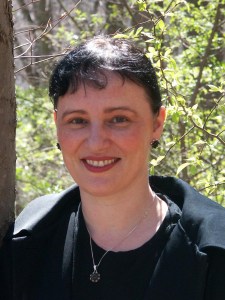 Anna Kashina writes historical adventure fantasy, featuring exotic settings, martial arts, assassins, and elements of romance. Her “Majat Code” series, published by Angry Robot Books, UK, received two Prism Awards in 2015. She is a Russian by origin, and a scientist in her day job, and she freely draws on these backgrounds in her writing. Her newest novel, SHADOWBLADE, is upcoming from Angry Robot Books in May, 2019.

You can learn more about Anna at her blog: 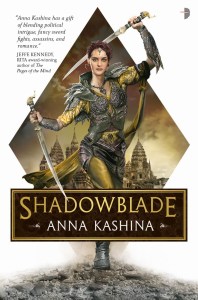 A young sword prodigy must impersonate a lost princess and throw her life into a deadly political game, in this kinetic epic fantasy novel by the author of the award-winning Majat Code series

Naia dreams of becoming a Jaihar Blademaster, but after assaulting a teacher, her future seems ruined. The timely intervention of a powerful stranger suddenly elevates her into elite Upper Grounds training. She has no idea that the stranger is Dal Gassan, head of the Daljeer Circle. Seventeen years ago he witnessed the massacre of Challimar’s court and rescued its sole survivor, a baby girl. Gassan plans to thrust a blade into the machinations of imperial succession: Naia. Disguised as the legendary Princess Xarimet of Challimar, Naia must challenge the imperial family, and win. Naia is no princess, but with her desert-kissed eyes and sword skills she might be close enough…