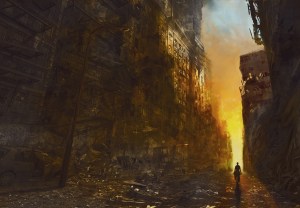 Hey, I’m fantasy author Joshua Palmatier, an OWW alumni, a member since almost the very beginning.  I’d like to introduce Zombies Need Brains.  It’s a small press I founded in 2013 because I got hooked editing SF&F themed anthologies for DAW Books.  I would have continued editing anthologies for them, but due to a shakeup in the industry around 2010, they were forced to drop their anthology line (or at least cut it back drastically) and I got tired of waiting for them to bring it back.  So in a fit of insanity in the summer of 2013, I created ZNB.  I wanted it to be a professional market, with professional pay rates, professional cover art, and professional design.  I wanted it to treat writers and artists with the respect they deserve (being a writer myself), and above all I wanted it to succeed while still paying authors and artists on time.

Since those lofty aspirations first took root, ZNB has managed to publish thirteen SF&F themed anthologies, from steampunk vs aliens to sword & sorcery to time traveling bars to were-creatures other than werewolves.  Every year, I pick a few themes I think are cool and then collect a small group of what I call “anchor authors” and, with their help, we run a crowdfunding campaign in order to generate the funds to produce the anthology.  The backers of the campaign are essentially preordering the anthologies, so I k now whether the themes I’ve chosen are actually good or not.  (If they aren’t interesting, then the Kickstarter won’t fund, right?)  All typical for a small press or an SF&F anthology being put on the market today, right?

Well, here’s where ZNB is different.  Unlike traditional publishers that put out themed anthologies (few and far between today), ZNB fills out the rest of their anthologies with an open call for submissions, because I believe in finding new and strong voices in the SF community.  The only way to do that is to let anyone submit.  So while about half of the anthology is filled with known names in the field, such as Seanan McGuire, Faith Hunter, S.M. Stirling, etc., the other half of the anthology comes from the best stories I can find in the slush pile generated by the open call.  Yes, this is a ton of work and those 7-10 slots in the anthology are highly competitive (and getting worse as the number of submissions each year grows), but it’s worth it to find those new voices.  This is something I, as the founder of ZNB, firmly believe in:  open calls are necessary if we want the field to stretch and grow.  Often, the best story in the anthology—or at least the story I think is the best—comes from the open call.  And I love to see a New York Times bestseller right next to an author who’s just made their first professional sale.

ZNB is running a Kickstarter right now where we hope to fund three brand new anthologies with the themes of apocalypses, food, and old tech finding new life.  Click through the link to read more about it and, if you can, back the project!  I’m here, though, to give you all at OWW a little insight into what it takes to get a story from your brain onto our pages.

Let’s suppose you’ve already brainstormed and have come up with an idea that fits the theme.  As you can guess, that’s not enough.  We get a ton of stories submitted where, when I’ve finished reading the story, I end up saying, “OK, that was a cool concept, but there isn’t a story here.”  In essence, the author wrote out their idea, but they haven’t yet taken the time to develop a story around that idea.  And that’s key.  It’s extremely rare for ZNB to accept a submission based on idea alone.  This is why we rarely accept stories less than 2500 words or flash fiction–it’s not that the writing isn’t good, it’s that it’s difficult to get across a completely developed story in that short a timespan.  It’s possible (we’ve accepted one or two in our past anthologies), but it’s rare.

After capturing my attention, you need to hold it, so the pace needs to be fast.  Remember, this is a short story.  Each word needs to matter, so keep things tight and focused.  Don’t let yourself wander into subplots and secondary threads or secondary characters, as you would with a novel.  Keep yourself on track with the main idea.  You can always expand the story later on into something larger if you want, but for now, focus.  If you’ve already written the story, then during revisions you need to look at the main idea and cut everything else out.  Narrow the story down to whatever is needed for the idea and the character arc.  Everything else must go.  Tighten, tighten, tighten.

So, when thinking about submitting a story to ZNB’s slush pile, start with a cool concept.  Build an engaging character arc around that concept.  Mesh the two together.  Tighten the prose.  Let it sit for a few weeks, then go through and tighten it again.  Because that’s what we’re looking for:  a tight, focused story where a cool concept and interesting character arc merge into a stunning work.

Now, take these words to heart, sit down, and write that story.  Good luck!